This post describes an interesting string-matching problem that I faced when tracking students’ attendance, using google forms, in one of my courses.

In order to track class attendance in one of my courses, I decided to use google forms with a format like the one displayed in the figure below: 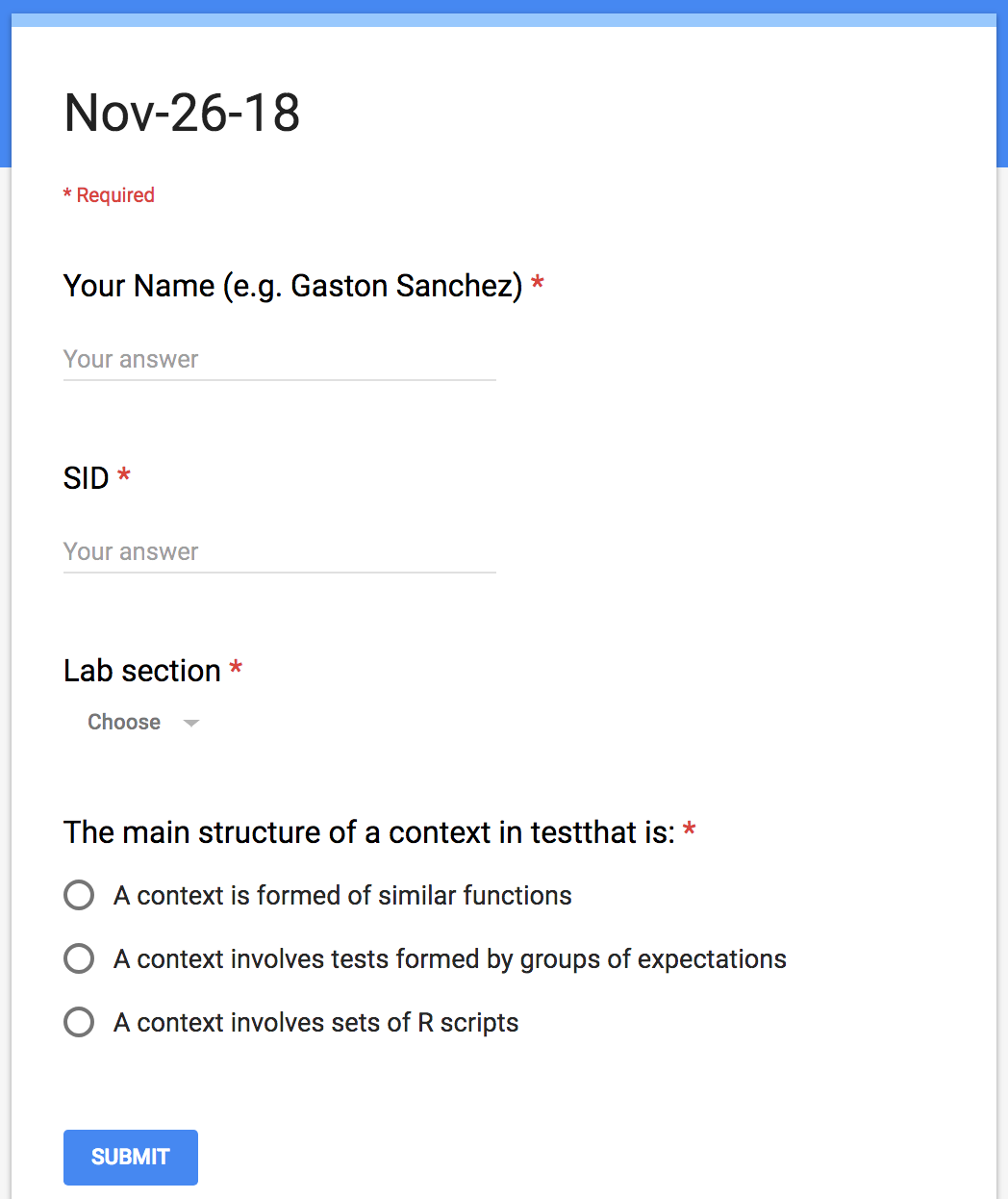 As you can tell, students had to provide their names (e.g. Gaston Sanchez), their student ID (SID), the computer lab section they were enrolled in, and answered one or more simple questions.

At the close of each lecture (typically during the last 3-5 minutes of class), I displayed a shortened link of a google form. By the way, I used Google’s URL shortener: https://goo.gl to get a shorten link. For example, instead of displaying a long link like this:

I was able to display a compact string such as: goo.gl/QKFJ8N

For every google form, I created a CSV file containing the answers. Actually, I ended up with 30 CSV files having an appearance like the following screenshot of a google sheet with some hypothetical content.

My goal was to determine if a student was present in a given lecture day. To do this, I had to find a way to determine if the name or the SID of a student, provided in a google form, matched the name or SID in the roster. This doesn’t seem to be that complicated, except for the fact that I ran into a couple of issues:

This turned out to be an interesting challenge to work with strings. And of course, I did all the manipulation in R.

The “official” names were in a text file called roster.txt. This file is a CSV file with one column Student that contains the names of the students in the format Last, First: e.g. Sanchez, Gaston.

The provided names were in CSV files, e.g. "Sep-05-18 (Responses) - Form Responses 1.csv", containing at least five columns. The second column had the names, and the third column the SIDs.

After playing a bit with the provided names, and the names available in the roster, I decided to break down the name in the roster file. More specifically, I focused on getting the name. To avoid dealing with upper and lower characters, I converted all strings to lower case:

I also extracted the provided first name, and last name, from the CSV file(s). Assuming that a CSV was imported in a data frame called dat, here’s the code that I used to get the first and last names (in lower case):

If there was at least one match (at least one TRUE value in each matching operation), I considered that as attendance.

Here’s what the assumed file structure would look like with the roster.txt file, and the CSV files from the answered google forms:

Here’s the code that I used to count attendance. It assumes that all the files (roster.txt file, and answers in .csv files) are in the same working directory.