The meeting was kindly organized by Stéphane Dray and company, and hosted by l’Université Claude Bernard Lyon 1. The main goal of this type of R meeting is to get together la cRéme de la cRéme in France working with R. Among some of the popular names you may have heard of: Romain François, Christophe Genolini, Karim Chine, Francois Husson, and Jérôme Sueur (just to name a few). Hadley Wickham, now chief scientist at Rstudio, was the keynote speaker and he delighted us with his presentation on bigvis. Briefly, the main idea behind the package bigvis is to provide exploratory visualization tools for very big large datasets (10-100 million observations). For those of us interested in data analysis tools, François Husson gave a presentation with some of the new improvements around the popular package FactoMineR by the nice team at Applied Mathematic Department, Agrocampus Ouest in Rennes. Among other speakers, we had the chance to listen to Christophe Genolini who showed us the package KmL3D. For the French community, if you are not familiar with Christophe, you should check his tutorials on creating R packages. Especially interesting for programming with S4 classes. Romain François, the guy behind R Graph Gallery, gave a short presentation about the renowned package Rcpp. His slides were interesting, but what caught my attention was a the fact that he was using his smartphone to switch slides. Later I asked what he used and he told me it was the keynote app (which I think can be very useful!) Yes, you need wifi to synchronize your mac and your iphone but then you have the freedom to move around the stage.

R and the Cloud (by Karim Chine) 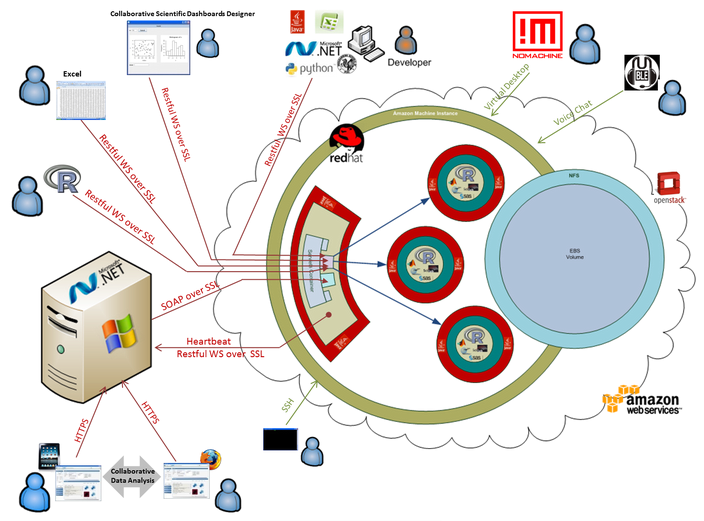 Another very interesting talk was given by Karim Chine about Elastic-R. My main complain is that a one hour talk may not be enough to show all the really cool stuff you can do with R and cloud computing. It is my opinion but I think Karim deserves his own R meeting, or at least a couple of workshop sessions.

R as a sound system (by Jérôme Sueur)

Although I didn’t take a picture of Jérôme Sueur (I was not close enough), his presentation was by far the best presentation of the entire meeting. He gave an illuminating talk on bioacoustics and some of the packages that R offers to analyze sounds and acoustic data (see his R package seewave).

I asked him if he was planning to share his slides. He told me that if the meeting organizers didn’t share them, he would eventually upload the presentation to his website. In any case, I really hope he (or the meeting organizers) get to share the slides so you can check his awesome work. What I liked the most about his talk was the notion of Sonification, which is the analogy of visualization but instead of visual cues to represent data you use sounds to listen to data (ain’t that cool?)